Contact us to discuss becoming an Andavo Travel affiliate. Fill out the form or call us at 866-327-7600.

Get swept up in some royal-inspired historical fiction, dive into a Mediterranean murder-mystery, and more with the new books we’re reading this month. 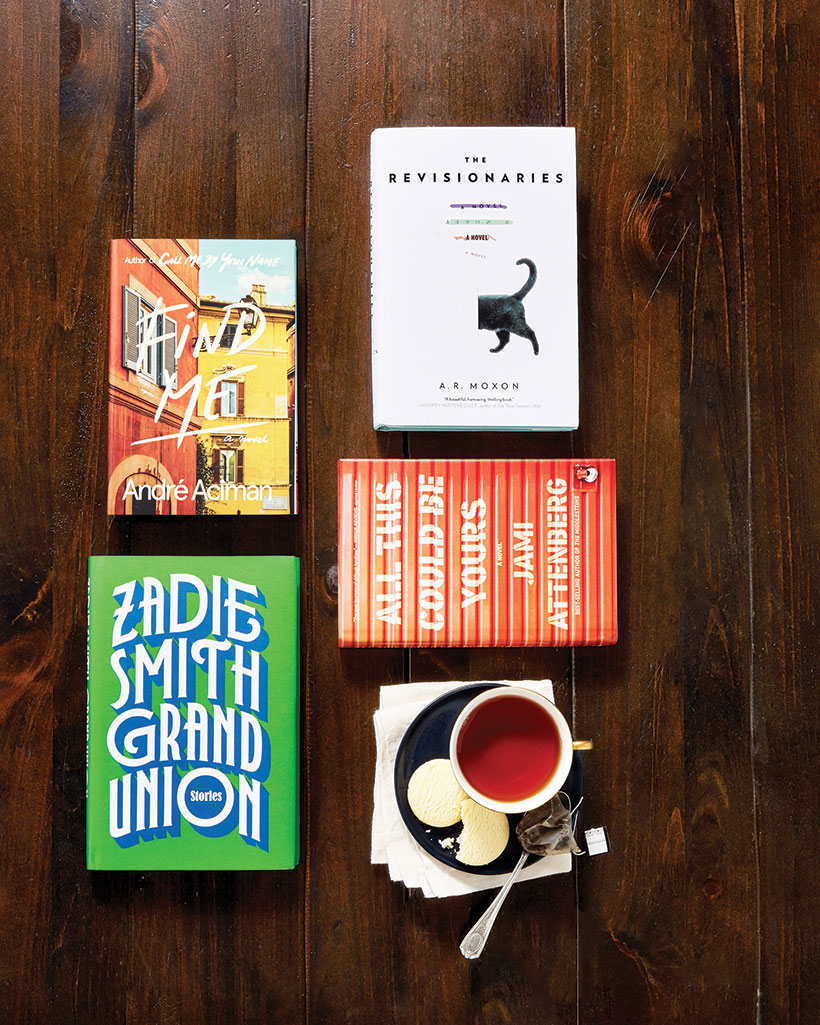 Find Me by André Aciman (Farrar, Straus & Giroux)
The sequel to Call Me by Your Name revolves around Samuel Perlman, the father of the first novel’s protagonist, Elio. Ten years after the young Elio’s summer affair with Oliver (Samuel’s research assistant), Elio is now an acclaimed pianist in Rome with a serious lover. Oliver is a married college professor. When Samuel takes a train to visit his son, he falls into his own love affair, one that troubles Elio, whose mother has died. Meanwhile, Oliver’s marriage has also died, and he returns to Europe in search of Elio. Fans of Aciman’s 2007 novel and its Oscar-winning film adaptation know that while these events sound straightforward, the author’s compassion for his characters and respect for all varieties of love make his fiction irresistible. macmillan.com.

Grand Union by Zadie Smith (Penguin Press)
Who better than the fresh-voiced and opinionated Smith to get inside the bewigged head of aging drag queen Miss Adele (“Miss Adele Amidst the Corsets”) or to pen a modern parable (“Two Men Arrive in a Village”)? Smith’s fascination with nearly everything she encounters leads to real versatility in style and subject in her first short-story collection, so that even when a piece falters (“Just Right”), readers can trust that an intriguing read awaits with a turn of the page. penguinrandomhouse.com.

The Revisionaries by A.R. Moxon (Melville House)
Father Julius’ running shoes and denim clerical robes provide just enough cover in an underserved corner of a Tennessee city for his parishioners to overlook his cloudy past. But when a nearby mental institution releases its patients and a local cult frightens his motley flock, Father Julius needs to find some answers for his deeds. Describing this enormous, serious, yet somehow also whipped-to-a-froth novel is as slippery as one character’s sardine canning. It’s about theology, urban planning, social services, gang violence, and so much more. Pick it up now and say you read Moxon before he became the next Tom Robbins. mhpbooks.com.

All This Could Be Yours by Jami Attenberg (Houghton Mifflin Harcourt)
What happens when the people who raised you are not merely dysfunctional, but criminals
on the run from their past? Jami Attenberg, whose All Grown Up and The Middlesteins also lifted the curtain on family shame, shows how difficult life has been for Alex and Gary, twins whose parents, Victor and Barbra, suddenly retired and relocated from the Northeast to New Orleans. When Victor has a stroke, Alex hurries to be with her parents; Gary remains in California, where his wife, Twyla, shoplifts scores of drugstore lipsticks. Meanwhile, Barbra obsesses about steps on her fitness tracker. All This Could Be Yours is an unusual, seamless novel with deep wisdom about redemption. hmhbooks.com. 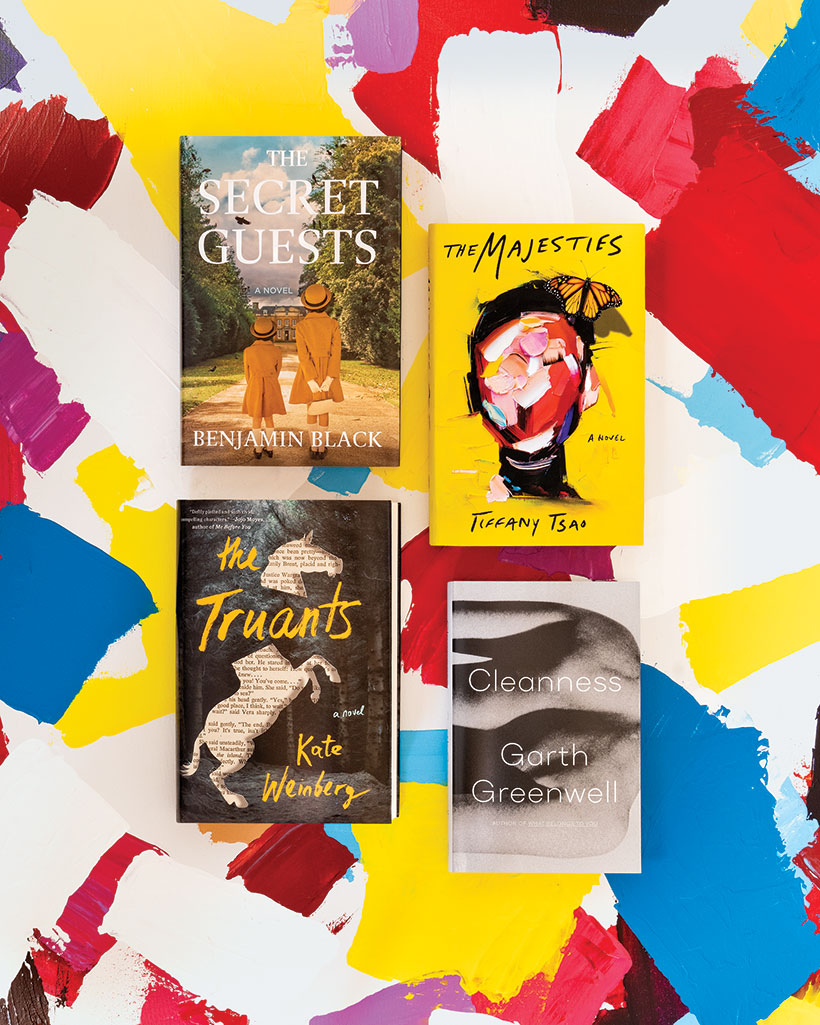 The Secret Guests by Benjamin Black (Henry Holt & Co.)
Pick up this novel after binge-watching season three of The Crown for a different glimpse of those most famous sisters, Queen Elizabeth II and Princess Margaret. Based on evidence that the young siblings spent the Blitz at an Irish estate, Black places them at Clonmillis Hall, home of the Duke of Edenmore, with Miss Celia Nashe, a chaperone who proves to be more than a nanny. Children will be children, and the townspeople will be nosy. Soon the action ratchets up, and Nashe, a secret agent, and her assistant, Garda Strafford, must fulfill their roles. macmillan.com.

The Majesties by Tiffany Tsao (Atria Books)
Whereas Crazy Rich Asians took the romcom approach to uber-rich family politics, here, Gwendolyn and Estella, scions of an Indonesian-Chinese clan, delve into the dark side of mega-wealth. The story opens with Gwendolyn in a coma, narrating from her subconscious about Estella’s poisoning of all 300 members of their extended family during a birthday party. Her unspooling memories recount a pampered upbringing, attending university on two continents, boyfriends and husbands, and curious careers: Estella runs the family silkworm factory, while Gwendolyn’s lab has developed a serum that turns insects into temporarily stunned “bagatelles,” or accessories. Is this a case of sibling rivalry run amok, or does Gwendolyn know something she can’t share with anyone else? In a novel that’s about a family inheritance in many senses, readers’ every guess will likely prove wrong. simonandschuster.com.

Cleanness by Garth Greenwell (Farrar, Straus & Giroux)
The follow-up to 2016’s What Belongs to You reads like a master class in turning lived experience into high art. In nine stories about a gay American man’s years teaching English in Sofia, Bulgaria, Greenwell’s novel conveys big concepts (desire, longing, alienation) with perfectly observed moments, from hands circling a coffee cup to the repetition of an unfamiliar word. Some subject matter is prosaic, some profane; both types are elevated by his sinuous sentences, which read more like poetry than prose. macmillan.com.

The Truants by Kate Weinberg (Bloomsbury)
No burying the lede: Fans of Agatha Christie novels will fall for this debut thriller that moves from East Anglia to Sicily’s Aeolian Islands, and from a group of university classmates to a shocking secret. And Christie herself plays a role in the mystery: The entire book plays off Dame Agatha’s 11-day disappearance in 1926, and as its protagonists reach Italy, the plot thickens faster than a British pudding. Weinberg’s obsession with Christie, as well as her own background in South Africa, at boarding schools, and at Oxford University, feeds into the menacing atmosphere. amazon.com. 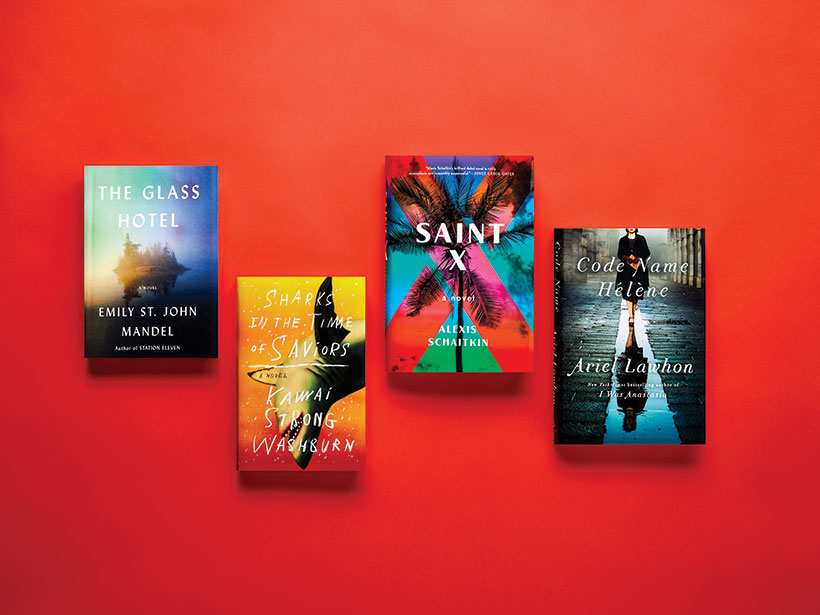 The Glass Hotel by Emily St. John Mandel (Alfred A. Knopf)
A marriage ends after the husband’s international Ponzi scheme collapses. Years later, the wife disappears from a container ship on which one of the scheme’s victims worked. It’s no surprise that the two events are connected, but it’s in the connecting that Mandel captures the spirit and atmosphere of places most of us never see: federal prisons, luxury hotels’ service floors, underground dance clubs. Already optioned by NBCUniversal for TV, this twenty-first-century ghost story follows sibling love through horror and loss, demonstrating how easily a life can change in a moment, with one action. penguinrandomhouse.com.

Sharks in the Time of Saviors by Kawai Strong Washburn (Farrar, Straus & Giroux)
When, in 1995, 7-year-old Nainoa “Noa” Flores survives a cruise ship fall and is delivered back to his mother in a shark’s jaws, both his Filipino-American family and the media hail his rescue and strange new abilities as signs from the ancient Hawaiian gods. However, even this miracle can’t keep the Flores family together as the sugarcane industry collapses and three siblings navigate life in North America. When they are eventually reunited, it’s by a tragedy springing from supernatural forces in this tale that combines myth, magical realism, and modern life in Hawaii to an unforgettable extent. mcdbooks.com.

Saint X by Alexis Schaitkin (Celadon Books)
Alexis Schaitkin’s debut portrays a woman’s grief and obsession over a sibling she hardly knew. When Claire is 7, her older sister Alison disappears from a resort on the Caribbean island of Saint X, where the family is vacationing. Her body is found, but no one is ever convicted of her murder. Years later, an encounter with one of the original suspects in the case triggers grown-up Claire’s obsession to find out who her sister was and reveal the circumstances behind her death. Less a murder mystery and more a search for meaning and identity, the novel is a must-read for fans of Julie Buntin’s Marlena or Florida by Lauren Groff. celadonbooks.com.

Code Name Hélène by Ariel Lawhon (Doubleday)
Nancy Wake, a real-life Australian socialite living in Paris in 1936, marries a Frenchman. When Germany invades, she becomes a spy for the Resistance – as one does. In four interwoven timelines based on Wake’s four code names, Ariel Lawhon shows how one woman’s ability to shapeshift threatens not just her own safety, but that of her loved ones. As “Lucienne Carlier,” Wake smuggles people and documents across the border. As “The White Mouse” (a nickname from the Gestapo), she evades capture and is forced to flee to Britain. Trained with that country’s special operatives, “Hélène” is then air-dropped back into France as “Madame Andrée,” whose signature is her red lipstick. This fabulous historically inspired fiction draws power from its basis in Wake’s accomplishments and near-death misses. penguinrandomhouse.com.